No More Heroes Review By KingreX32

No More Heroes was developed by Grasshopper Manufacture and published by Ubisoft, Rising Star games and Marvelous Interactive. It was released on January 22 2008 in the states and on February 8 2008 in Canada. It was written and directed by Suda 51 (killer 7 ring any bells) and is one of the best mature titles on the Wii so far. As many fans of the game might know NMH2 is currently a working title and will be released for the early part of 2010. here's my review on No More Heroes.

No More Heroes is a third person action adventure video game. It takes place in the fictional city of Santa Destroy California. Players take control of 23 year old Travis Touchdown, an otaku ( a guy who is obsessed with anime and stuff) who runs out of money buying video games and wrestling videos so takes up a job as a hit man. At first he thinks his fight with Helter Skelter is just for a quick buck, but he soon finds out that he killed an assassin that was rank 11 in the UAA (United Assassins Association). Now the game starts your objective kill the other ten assassins above you to become number one.

Once again the controls in the game were just perfect, motion controls weren't kept to a minimum but they didn't feel tacky and added on at the last minute. The motion controls actually made you want to use them like, pushing B on a stunned enemy at that point Travis will grab them prompting an on screen command to flick the wiimote and nun chuck in a certain way to perform a devastating wrestling move. Through out the game there are over 12 different moves to learn and keep your enemies at bay. Also in the game there are many different beam Katanas (not light sabers) to collect and upgrade extending Travis's sword combos. Travis is also upgradeable to you can change his cloths (which appears in cut scenes) and his strength by going to Thunder Ryu's gym to lift some weights or dumbbells. 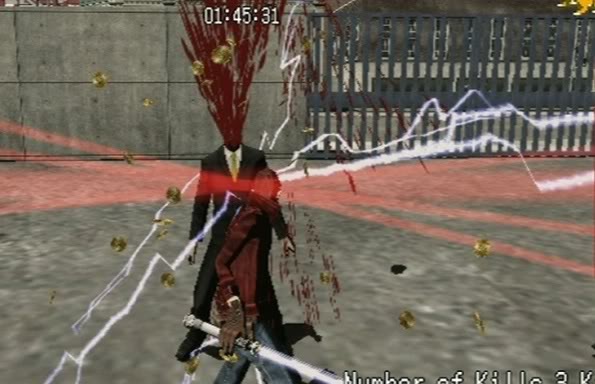 But what really makes the game stand out from other Third party titles are the characters. Getting enough money to get to the ranking fights can sometimes be a pain (if your one of those people who like to blaze through video games) but the characters and cut scenes are worth it. There is a variety of colorful characters for Travis to do battle against, each one of them unique in his or her own way. Remember what I said earlier about getting enough money to get into the rankings fights, well yes you have to pay money to get into those fights. Don't worry though, there are a slew of jobs at the job center to help you if your low on cash, and if mowing lawns, picking up trash and delivering coconuts just isn't your thing then take a trip down to K entertainment for some killer assassination missions to help you out also. No More Heroes also features an addictive soundtrack that will make you want to play the game just to listen to the music. Each rankings fight has a different track that perfectly fits the tone and setting of it. 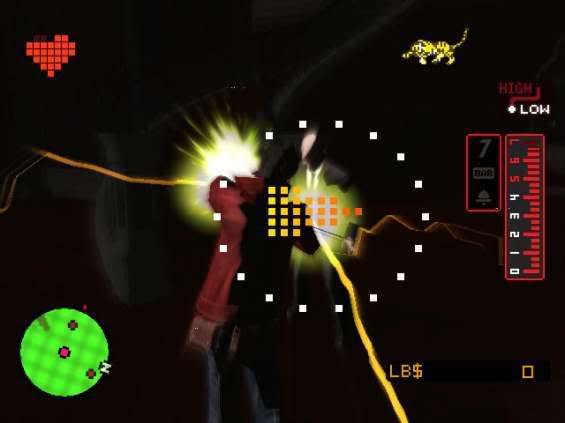 In terms of graphics, like Madworld, and Afro Samurai, these aren't your typical graphics and you know what they fit the game perfectly. In the game play department No More Heroes is pure awesomeness, its fast paced action and perfect combination of wrestling and sword fighting make this game very fun to play, not to mention the over the top violence. The humor also adds to the funosity (yes I said funosity) of the game. 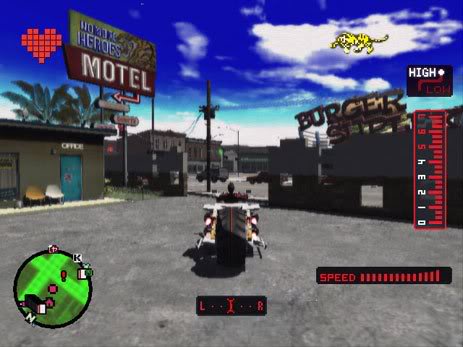 Overall No More Heroes is a great game, the story is simple but great, the cast and characters are amazing, the graphics and game play are just perfect and Travis's bike is fun to mess around with. This is an almost perfect game but I have to talk about the bad features too. The game is great but getting to the ranking fights are extremely repetitive. Basically you get money to get into the fight, beat the boss and get money from that fight just to do it again. Like GTA No More Heroes is an open world environment, but there really nothing to do in the over world, Santa Destroy is just as dull as my grandparents house. So you really have no choice but to go to the next rankings fight.

Yes i know this is my millionth time saying this but No More Heroes was an amazingly awesome game and everyone of age should give it a try No More Heroes get a 9.6 out of 10.