Last month after I finally finished moving into my new place I decided to treat myself. While browsing in the mall (Shoppers World) I came across a stand in a Gamestop with cases for Pokémon Black and White 2 on display. I immediately went in and purchased a copy. To my dismay I found out that the boxart on display was actually just really convincing display cases as the game wouldn’t actually be released for another two weeks.

As the days went by I found myself constantly wondering whether or not I should keep Black 2; the game looked good but I was really attached to Diamond which I’ve had since launch and accomplished so much in. Finally the day came when I was able to get my copy. Was it worth it? Read on.

Pokémon Black 2 is the direct sequel to Pokémon Black; it was developed by Game Freak, and published by Nintendo and The Pokémon Company. It was released on October 7th 2012.

Black 2 takes place 2 years after the first game. As with all Pokémon games the objective remains the same, which is to travel around the Region (The Unova region) Battling Trainers and collecting Gym badges. When you get to a certain point you can battle the Elite Four to become the new champion. As always along the way you do battle with the Bad guys (In this game it’s the new Team Plasma) in order to stop their various evil plans.

All the things you would expect to find in a new Pokémon game return in Black 2; a new Region, new areas, new characters, new gym leaders, and new Pokémon. Like its predecessor Black 2 features the same 156 Pokémon from the first game, in addition to these are the new forms of Kyurem (Black and White Kyurem). Many features from the first game return ; features like the C-gear (a multipurpose device used to allow quick access to the internet), the Pokémon Global Link (Similar to the GTS in Diamond this allows players to trade Pokémon over the Nintendo Wi-Fi Connection, upload their save files online to the Global Link website and download new skins for the C-gear), Pokémon Dream World (an online minigame that allows players to upload their Pokémon online to play games interact with other Pokémon, and collect items) the Entralink ( an area in central Unova where players can take part in multiplayer battles and catch Pokémon from the Dream world) , Triple (like Double battles) and Rotation battles (Like triple battle but Pokémon are rotated from left to right in anticipation of the opponents moves) and lastly, Seasons (Spring, Summer, Fall, Winter). Like previous games once you complete Black 2 you have the option of transferring your Pokémon from Diamond, Pearl, Heart Gold, and Soul Silver onto your Black 2 or White 2 Game card.

Aside from a few new aesthetic changes (Richer colours, New Character Animations etc.) Black 2 remains almost the same game as its predecessor. The game however does have a few new features to keep it up to date and fresh. One of these new features is the Pokémon World Tournament; here players get to face all the Gym Leaders and Elite Four members from previous games. This mode is like the Battle Frontier from Diamond, here mythical Pokémon (Groudon, Kyogre, Diagla, Palkia etc) are all banned from participating as this tournament is all about skill. Here you will see many familiar faces like Wattson (Gym Leader from Ruby/Sapphire) and Cynthia (The Champion from Diamond/Pearl).

Another new feature introduced in Black 2 is the Pokestar Studious. The Pokestar Studio is like the Contests from Ruby/Sapphire, it acts as an alternative to battling. Here players can enter their Pokémon into films to act is a wide ranch or scenarios. When you are finished you can view your film in an in game theater. As mentioned above ones of Black 2’s new features are fully Animated Sprites; during battles Pokémon will move, blink their eyes and react to certain moves and attacks. Gym Leaders and NPC’s also feature full animation.

Graphically Pokémon Black 2 is the best looking DS Pokémon game so far. The environments are vibrant and features very full clear colors. The overworld as always feels very alive with a wide range of Characters to talk to and interact with. Gameplay wise Black 2 features a few tweaks like allowing you to use a potion more than once without having to enter your bag each time and allowing you to re-battle any encountered Pokémon Breeders. Nonetheless the gameplay remains very much the same to every other previous handheld Pokémon title. Control wise if you played Diamond or Pearl or pretty much any one of the Pokémon games on the DS; these should not be a problem as they remain mostly the same.

Black 2 isn’t a perfect game but I personally don’t have much to complain about. While it is very similar to past games there is enough new features and content in it to make it not feel like a rehash of previous games. I like that the game feels a bit easier yet still retains the series challenge and depth. I also like the fact that battles seem to progress faster and that Pokémon seem to level up quicker. This helps to take some of the grinding elements away from the game. I know grinding is an integral part of RPGs but there is nothing wrong with breaking a few rules. 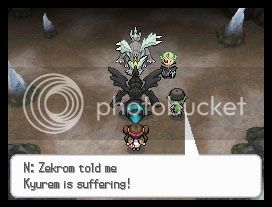 Overall Pokemon Black 2 is yet another great Pokémon game. It seems similar but it is vastly different from its predecessors. Black 2 gets 9.7 out of 10.