Shawn White Snowboarding is a multiplatform game, published by Ubisoft, and developed by Ubisoft Montreal. As the name implies this is a video game starring the legendary Shawn White. Here's my review of Shawn white snowboarding on the DS. 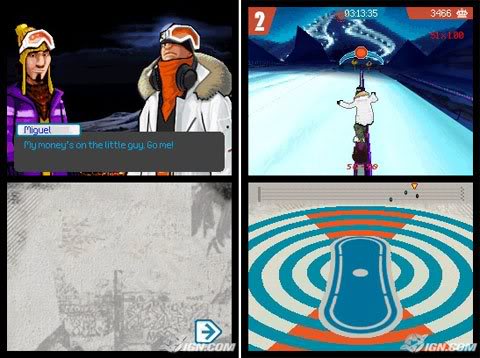 Shawn White Snowboarding is well... a snowboarding video game. When you start you have four characters to choose from, as the game progresses you can unlock more characters and snowboards. (Including Shawn White himself) This game really doesn't have a storyline but basically you're just snowboarding so you can get better at snowboarding, so you can eventually board against Shawn White himself, that's basically it. Through out the game you have many challenges to take part in like, trick challenges, point challenges, time trials, own the spot challenges and many others. By doing challenges you get decals but not to decorate your board, but to improve its performance, some improve balance, some improve tricks and some improve speed. You have a total of 42 decals to choose from (it you unlock them all) but you can only put three on your board so choose wisely. Shawn White Snowboarding also has a very catchy and addicting soundtrack, which surprisingly suits the game very well. Songs like Alive and Amplified by The money Suki, Rock Box by Run DMC, Anna molly by Incubus, Acceptable in the 80s by Calvin Harris and many many many more. 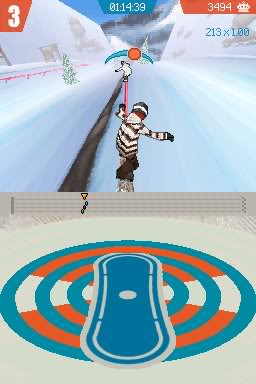 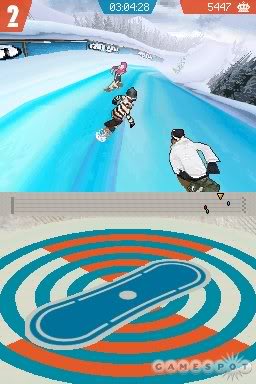 When it comes to graphics these ones are ok, there kind of cartoonish, but it fits the overall tone of the game. The game play is great and the best use of the touch screen I've seen so far. Move the stylus to the top of the screen to increase speed, move the stylus to the middle of the screen to decrease speed to an average speed, move the stylus all the way down to decrease speed to a crawl. The great thing is the character on the top screen will react to the different positions you put the stylus. The tricks are very numerous, just learning them all is just out of the question, but when you get most of them down there very rewarding to look at. Basically to do a trick you just move the stylus down then up to jump, while in midair you can perform tricks by sliding the stylus in various ways across the screen. You can also perform grabs by pushing anyone of the directional buttons (for you right handed people) or a, b, x, y. (for you lefties). 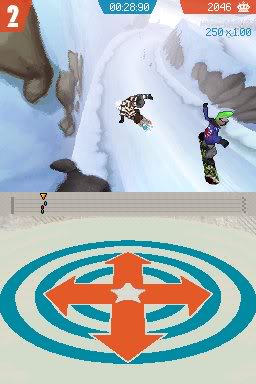 Overall I found the game to be really fun to play it's easy and anyone can play it. The soundtrack very addictive and once again suits the overall easy going tone of the game. Unfortunately the tricks are kind of difficult to learn as you have to time how you do them wisely or you could have a major wipeout. Shawn White Snowboarding on the Nintendo DS gets 9.3 out of 10. 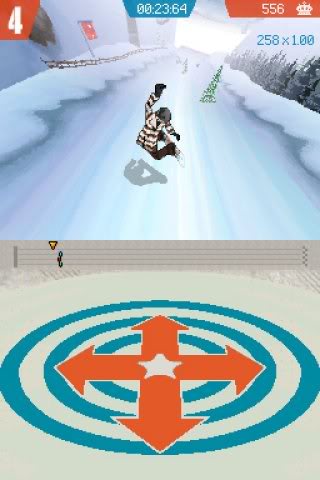