NFS Carbon Own The City Review By KingreX32

NFS Carbon was a multiplatform game for all the seventh generation consoles. NFS Carbon own the city was released separately for the handheld consoles, DS and PSP. They were developed by EA Black Box and published by EA. They were released October 31 2006.

NFS Carbon Own the City has a different storyline than its console counterparts. It's about a guy trying to find his brothers killer. Apparently he was in a race with some guy, and he ran the main characters brother of the road. So to earn respect and get info the main character and his crew race other crews in the area.

The game really doesn't have any features to make it stand out from other racing games on the DS. It is NFS so you get things like a great soundtrack, songs like Joker and the Thief by wolfmother, and Signs of Life by Every move a picture are in the game also things like many different cars to unlock, race and customize (this time around you can customize dashboards). Some of the other few features the game has are wingmen and the ability to create a logo for your crew. Although there was a lack of features the game was still really fun to play. Racing takes place always at night, and traffic is almost always on the street added to the challenge of the game. There are also lots of short cuts scattered through out each "level" to help you get an edge over your opponents. There is also offline multiplayer. 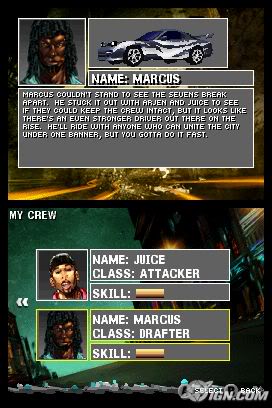 Graphics were not the greatest; the environments were full 3D and looked pretty good. The cars looked very angley, but the games looked Ok overall. The game play was really good, unlike the console versions, there weren't cops, autosculpt, or mountain racing, but there were short cuts, winding roads, unexpected traffic to deal with and the wingmen thing was also a great addition to. The controls were simple, A to go, B to brake, Y to look back, and X for nitrous, and if you don't like the controls, there customizable.

Overall NFS carbon own the City, was a pretty good game for the console it was on. The graphics were Ok, the game play awesome, and thought the features were few the little that was there, was still good. The only problem with the game was, it did take place mostly at night so most of the track and traffic you couldn't see, also the lack of mountain racing in this version, and the wingman feature. Yes it was a good feature but when you were driving with your attacker, and say your in second place and you told him/her to attack, on there way to attack the person in first they would attack you to. NFS Carbon Own the City gets a 7.8 out of 10. 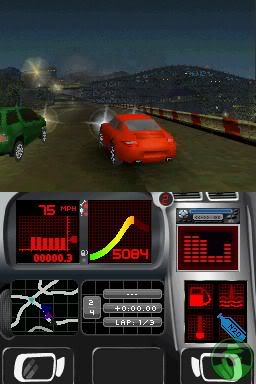